Science is slowing: sustainability can replace it as the engine of economic growth.

This book is a radical manifesto for the transition to sustainable energy as a remedy for most of the world’s ills: resource depletion, low growth, inequality, dysfunctional globalisation, and yes - it cures climate change too.

Everyone knows that science and technology are accelerating exponentially - or are they? They certainly raced ahead from the renaissance up to modern times, but if the engine of science stalled who would be the first to notice? And would they tell or keep quiet? This book argues that progress in applied science has indeed slowed but the signs of distress are confused and are coming from economic indicators like productivity, growth and interest rates. Scientists do not want to see what is happening, while economists see the problem but do not like to attribute it to science.

Paradoxically, another threat may be just what is needed to restore a sense of progress to society. Resource depletion and global warming also demand a change of direction. If we make this change now, through rapid investment in sustainable energy technology and infrastructure, we can avoid global warming, reduce the risk of resource wars and buy time to adapt to a low growth economy.

The situation today is complicated by the fact that three unrelated things are happening at the same time. Firstly, the slowing of applied science is reducing the rate at which new tangible products are becoming available to consumers, which slows economic growth. Secondly, the rise of the new information-based technologies has created strong "network effects" in economists jargon, meaning that what little growth there is, is concentrated in a few large multinational companies that employ relatively few people. Finally, the moment has come when the transition to sustainable energy can be delayed no longer. However, there is a silver lining to this trio of storm clouds. Making the energy transition requires a lot of new infrastructure, new house building and renovation - activities that are hard to automate, which will absorb a lot of work-hours and where well-understood economics still applies.

This conjunction of unrelated issues will require exceptionally clear sight over a wide field of view to find ways round and through the problems. So long as scientists, economists, philosophers, historians and storytellers all stay in their separate domains of expertise it is no surprise if the general public and their political representatives also keep their ideas in separate mental boxes and never make the necessary connections.

The recent briefing document from the Labour party Thirty by 2030 is written by people who really know their subject. It is well worth reading and full of sensible ideas. In the plot below I have tried to compare three things: 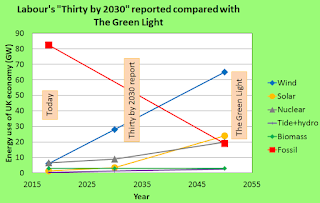 This shows that Labour's proposals, although percieved as radical, are in fact no more ambitious than those that I assumed in Green Light. And the Green Light is approximately equivalent to net zero by 2050 if one makes some very optimistic assumptions about carbon sequestration by bogs or forests or by man-made carbon capture and storage.
Posted by Steve Snow at 03:34 No comments:

This plot shows that the old tech such as electricity, cars and washing machines spread rather slowly. More recent tech such as microwave, internet and smartphone spread more quickly but, I would argue, has less practical influence on people's lives. 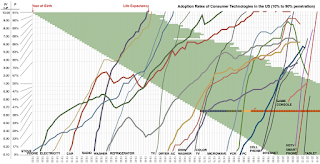 I found it on a US economics website but the data originates from our world in data where you can explore the data and add other technologies.
Posted by Steve Snow at 06:09 No comments:

Are Ideas getting harder to find?

The title speaks for iself and is copied from this paper by four economists from Stanford. Their first figure summarises the evidence. 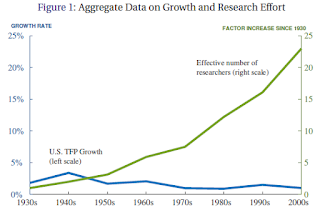 TFP is the part of growth which is attributed to technological progress. As many other economists have found, TFP peaked in the mid 20th century and has been falling since, despite the number of researchers growing exponentially with a doubling time of around 15 years.

The puzzle to me is why most economists do not accept that the slowing of science is the underlying cause of the low productivity, low growth and low real interest rates of the past decades. While most scientists would simply claim that science and technology are still accelerating. Could it be that the professional pride of the two groups prevents either from seeing clearly. If slowing science is the underlying cause of low growth then it undermines the economics profession because it suggests that designing better economic institutions will not solve the problem (though relaxing the grip of intellectual property law could at least provide a temporary boost to growth). And if new technology is arriving at a lower rate despite the growing number of researchers, that obviously does not reflect well on the science profession.
Posted by Steve Snow at 02:58 No comments:

Here's an interview with economist, Enrico Moretti, about the geographical concentration of growth in the newer industries such as information- and bio-tech. It reinforces my view that more growth in these areas will not easily spread to greater prosperity for the population as a whole. At least, in the present climate of unquestioning belief in "intellectual property rights" the benefits of growth in these technologies does not spread widely.
In the case of companies that use a lot of energy or other natural resources to manufacture large heavy products there are advantages to spreading production over several sites scattered around the nation or the world. If a company only uses human resources and its products are digital or pharma or knowledge then there is nothing to prevent all the value from being created in one small site.
Posted by Steve Snow at 03:30 No comments:

As a nation we have a choice:

It's true that action at national level can only delay the Orange, but it can avoid the Red and show a Green example that others may follow.

First light from the green light.
Posted by Steve Snow at 05:16 1 comment: 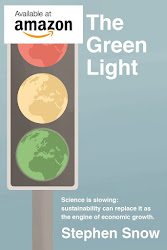 Steve Snow
I am an ex-physicist and writer, promoting sustainable energy from a pragmatic, self-interest point of view because I believe this is the best way to get the necessary majority support for change. In a former life I worked on experiments at CERN, the European laboratory for particle physics near Geneva. My proudest claims are to be one of the 3,172 authors of the paper that announced the discovery of the Higgs Boson and to be one half of a partnership that has raised three children who seem to be thriving so far. @SteveEdale

Other views are available